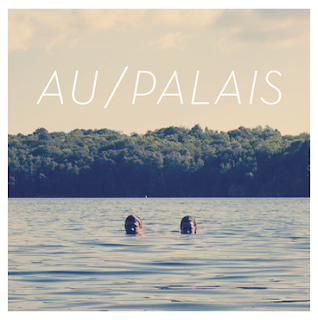 Meet AU/PALAIS: Paramedic/ Techno DJ David and Designer/ Songbird Elise Commathe. They make music you can dance or cry to. Pitchfork calls their music “throbbing.” This Canadian sibling duo is going to be massive. Here, have a listen (or do it after the interview)
http://aupalais.bandcamp.com/track/pathos
http://aupalais.bandcamp.com/
Last week, I invited them round the boat cabin for their very first interview, veggie hotdogs and Ting soda pop. (An offer impossible to refuse, obvs.)
M: What is the ideal situation to have Au/Palais as a soundtrack?
D: Wandering through a city, alone, after dark, with your headphones on.
E: It’s definitely night music. Dusk until dawn.


M: What are your musical influences?
D: I grew up listening to a lot of post-punk, particularly when I was in high school. My biggest band was Sonic Youth. I was obsessed with them. When I first heard ‘Androgynous Mind’ I didn’t even know music could do that. It opened up a universe places music could go.
E: He has a guitar signed by Thurston Moore.
D: Then when I was in my early 20s I had another re-awakening, with dance music, particularly with minimal techno.
M: That’s a mystery to me. Why do people like minimal techno?
D: (laughs)
E: We went to a minimal techno night and David was like, “This is amazing!” and I was like “Is it?”
M: I’m not saying it’s not, because I love a lot of electronic music, I’m just trying to understand why people like minimal.
D: You have to understand it’s dance music. It’s not like people are going to sit around listening and say, “Oh, this is a good melody.”
M: I love dance music. I love electroclash.
D: But this is specifically to dance to, like house or techno, it’s supposed to be part of an hour-long mix. It’s part of a composition. You have to go to an event to experience it. You’ll never see people so enthusiastic and in love with the music. The whole experience of it was so much more total than anything I’d heard before.
With minimal techno there is a very specific feeling. House music and techno focuses on the ecstasy of dance, joy, raising your hands in the air and feeling the moment. The atmosphere is joy and release. With minimal techno the atmosphere is anxiety and discomfort. It doesn’t sound positive but…it’s like the difference between Roxy Music and The Talking Heads. Roxy Music is really sexy. Talking Heads is really anxious, nervous. People love the Talking Heads because they’re really anxious. For me the tension in minimal techno, that feeling in your chest, is really exciting. That’s what drew me to it. Lately we’ve both been really into…
E: This Mortal Coil. That’s a big influence right now. Other than that, I’ve got morestraight-up pop sensibilities than David. Kate Bush is an obvious influence. And Patti Smith, from her personal style to her lyrics. Everything about her. And Bruce Springsteen.
M: If you could do a duet with anyone, who would it be?
D: Elise will go on record to say that her ultimate goal for the band is to have Bruce Springsteen invite her onstage to -
E: (laughing, interrupting) sing Nebraska.
D: Nebraska!
E: I didn’t tell you about my Bruce Springsteen time machine, did I? It’s basically a time machine built specifically to go back to 1985 to be with Bruce Springsteen.
M: Maybe you should make a song about that.
E: I would f-ing die. Or the ultimate- I can’t even fathom this- would be Bruce and Patti and all of us singing ‘Because the Night.’
M: David, if you could have a duet?
E: It’s probably Ricardo Villabos.
D: My other favourite band is Wire so maybe with them. 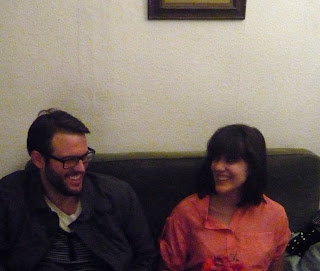 Is there vaseline on the lens?

M: What do you like about living in London?
E: I really like the moodiness of London, the dark side of it. I’m such a history nerd. I like how it’s old and dirty. I love this city.
M: I like the weeping willows by the canal.
D: Mmm.
E: I love how the sky gets this colour every ten days or so when it looks like it’s gonna rain but it’s not gonna rain. It’s gray with a tinge of yellow. I get excited about that kind of weather. It makes me feel nostalgic. And I love cobblestone alleys.
D: I’ve always loved cities. I have no interest in the country. I love the overpasses in East London. There’s something distinct about those that I find romantic. It reminds me of Tokyo. You can figure out where you are when you see the train go overhead. The arch beneath…
E: There’s something romantic-
D: Darkly romantic-
E: There is an underlying romance, and -
D: There’s a bit of dirt there.
Posted by Margo Fortuny at 07:08