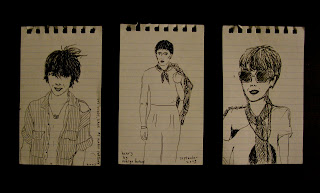 I illustrated some of the styles going on last weekend...Click on the image for the close-up details.
Offset Festival takes place in September in Hainault Forest, about 40 minutes from East London to the ticket booth...
Offset is fantastic. It showcases newer bands like Fiction, Wild Palms, and the Horrors, alongside the groups that have influenced them. The vibe is relaxed, (except when Kap Bambino played and everyone went crazy), the music is good, and both years the weather has been perfect- none of the downpour of Field Day or the My-face-is-surely-melting-off-under-this-infernal-desert-sun of Coachella. Everyone meandered over the grass, watched bands, danced around, and cast their eyeballs about. Boys wore short haircuts, black, brogues or Docs, and either high-waisted 1940s style trousers or the old skinny jeans and wayfarers combo. Girls sported black eyeliner, red lipstick, kneesocks, cotton carrier bags, mismatched thrift store gear or neo-gothic frocks and boots. There were plenty of glossy black bobs freckling the grassy fields. S.C.U.M. and Romance seemed to have the most hype. The Slits were mobbed and audience members shook hips on stage. I heard Wild Beasts were amazing, though alas, at this point in the evening I had been whisked back to London by an Italian pixie. 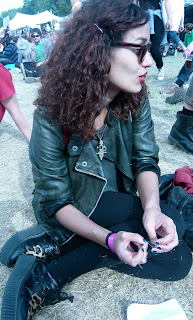 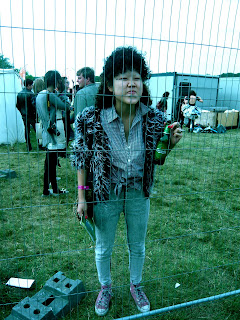 You can't go wrong with Chucks.
Check out my interviews with Fiction and Wild Palms on www.exitmagazine.co.uk next week... 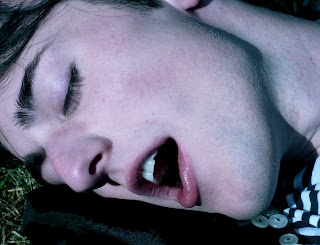 The Ecstasy of Saint/the Reece.
Posted by Margo Fortuny at 16:11 No comments: 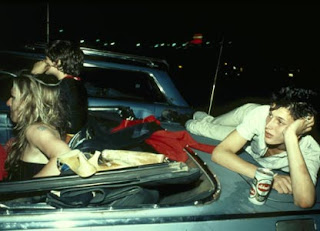 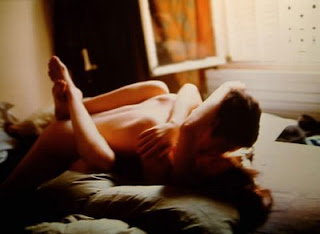 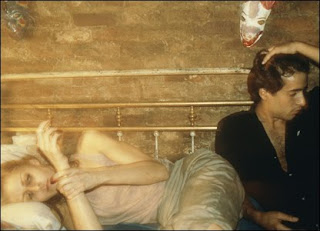 THE BED'S TOO BIG WITHOUT YOU

This is about an artist that started out D.I.Y, as in punk style, drag style, taking snapshots of her friends, documenting their lives: getting dressed up, listening to Lou Reed, getting wasted, fucking, being love-seared, dying, hanging out in New York/ London/ Berlin… The subject matter is often relatable (everyone has glanced longingly across a room, eaten birthday cake, peered in the mirror) and even when you haven’t done what’s depicted, you can FEEL it. The sting of youth, the excitement of experimentation, the disillusion of failed love, the aesthetics of a new city, self-transformation…Nan Goldin archived the feeling.

Snapshot-style photography is something anyone can do, from famous artists like Larry Clark and Wolfgang Tillmans to younger sparks like Ryan McGinley... yet Goldin’s work features a unique pathos. Nan Goldin is a snapshot pioneer, a staggering witness to love stories, addictions, nightlife, death, and the quiet minutes that happen every day. She is a historian to her best beloveds. Frank without being sensational, beautiful without being obvious, and cool without effort, Goldin’s photography touches a nerve. What sets her apart is the striking intimacy portrayed, exemplified in her work “The Ballad of Sexual Dependency.”

After studying at the Museum School in Boston, and surviving the suicide of her sister, a young Nan Goldin came to New York in 1978. She was a fan of Caravaggio, Faulkner, Tulsa, Dietrich, Antonioni, and Fassbinder… Back then NYC was punk/ dangerous/ electric with creative fire. In the late 70’s/ early 80’s, Goldin hosted Bowery loft parties popular for the characters in attendance…and the inevitable board games, rolled-up dollar bills, cake, cocktails, and tail-feather shaking. She worked as a waitress at Tin Pan Alley, while pursuing her vocation as a photographer. Goldin was part of the New Wave Life. The era’s parties, pleasures, and achievements were not important. The personal interactions were what mattered. She preserved them. She took pictures at work, out and about, at home, in bed, everywhere.

Goldin was inside the NYC downtown scene, and she documented it. On the topic of Goldin’s contemporaries, Darryl Pickney wrote “This was not the first generation to fall under the spell of the ruinous message that a wild life indicated a fertile imagination, that art was intrinsically progressive, a form of dissent, and that you would have to spend some time in the wilderness because of your daring aesthetic choices…” Goldin captured this 80s New York mood of heady recklessness and creative rebellion, before it burnt out. Many of the people shown in her early slideshows were dead by the 1990s.

As the years passed, Goldin maintained her intimate photography style while getting clean. She expanded her visual repertoire to include daylight, new characters, and more landscapes. The artist continues to create striking portraits and memorialize friends with AIDS. She exhibits internationally, from London’s Tate Gallery to Paris’s Centre George Pompidou to New York’s Museum of Modern Art.

Rewind a couple decades. In the beginning Goldin was presenting slideshows, usually accompanied by live bands, or homemade mixtapes. She worked the projector at bars and nightclubs, in front of an audience of friends. Her first NYC slide show happened at Frank Zappa’s birthday party at the Mudd Club. These slides, which became the seminal “Ballad of Sexual Dependency,” depicted a portrait of the Lower East Side collective experience, and the human practice of feeling and living and looking into oneself.

“The Ballad of Sexual Dependency” created between 1981 and 1996, is a series of 690 slides, shown over a period of forty-five minutes. The slides form a narrative, dealing with identity formed by gender politics, love, and sexuality. The subjects were her close friends assuming various aspects of themselves: lover, mourner, and social self/private self. Each photograph is taken as a tender glance, presenting imperfect people with such honesty and lack of judgment, thus rendering the subjects loveable and beautiful. At the time, the slideshow was radical. Now it is recognized as fine art. Her work is still relevant, as a window to a specific time and place, as a tool for awareness, and as a candid visual language.

Posted by Margo Fortuny at 19:38 No comments: