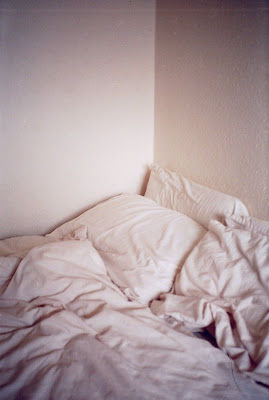 The piano was playing. She bowed to her leg, almost touching the barre. An arch, a gesture. The muscles kept repeating a rhythmic prayer. Pointed toes orbited over the floorboards. An hour passed. The piano stopped. She passed through rooms, picking up her bag, changing into tennis shoes, brushing loose strands off her damp forehead.

Outside the sky was a canvas. Clouds dissolved into swathes of bleeding violets. Her bicycle was waiting, locked up chastely. She hopped on the red frame and pedaled home, enjoying the wind singing around her face. The road ahead dimmed during the long ride and the hair stood up on her arms. The trees hid in the dark waiting for the moon. Turning left, she was home.

The house was quiet. A mound of grey fur napped in the corner of the kitchen. She reached for an apple and a knife. The apple was peeled and sliced at the table, devoured and finished.

Tomorrow’s our last morning, she thought in the shower, adjusting the faucets. She traced a picture of his face in the steamed glass. One night, they had sat in the green tub with the shower running, pretending it was raining, kissing between mouthfuls of cava. When he complained about the drink she poured the rest over his head. He tried to fold her like paper but there wasn’t room so she leaned back and leapt out and ran laughing to the next room, leaving a trail of wet footprints…

Washed, rinsed, dried, wrapped in a big coarse towel, she retreated to bed. Alarm set, she curled up in sheets like peach skin.

It was still dark when she slipped on the white cotton dress, clean tights, a holey blue sweater (the one she never washed) and boots. Her reflection was pleasing. She approached her bicycle in habitual steps. The pedaling woke her up.

This day had happened so many times. They liked to meet early. At first it was under the pretence of having company whilst running. Then they ended up walking in the bluish light, exploring the woods, and eventually pressing each other against the bark under the trellis of branches. Her mind roamed down familiar paths.

Hopping off the bike, she led it to the clearing where they met. The air smelled of wet dirt. Faint from excitement and a hunger that hummed in her belly she advanced. He was there. He looked fitting among the trees, shadowy in dawn, a Pan with dark locks brushing against explicit cheekbones. His lips were crimson and his eyes shone as if he had been enjoying wine. Smiling, speaking, their hands melded together.

He took a kiss and they began to walk over crisp leaves. The day was emerging. This was where she wanted to be and yet she couldn’t savor it. Already she felt his absence weighing on her, carving up their embraces. Anticipating the loss, she was distant. A small nausea and a swallow in her throat distracted from his words and warm hands. Some fingers were adorned with cuts: gifts from his guitar strings. His music had inspired first her admiration and then resentment.

They paused, looked at each other, cheeks flushed, lips biting. Faces close like blades of grass; they sunk down to become entangled one more time. Cottony arms surrounded her, pulling her near. His heart was beating against her chest. Forgetting the futility of nostalgia, she tried to memorize the kisses. He smelled like clean laundry and maybe he had frosted flakes for breakfast. These details were silently collected. They rolled over and she wandered into his eyes. Touches silenced the thoughts.

Soundless they lay there, waiting for the sun to warm them. Giving up, the couple stood, adjusted themselves and returned to the clearing. Shivering a little, there was not much to say now. They wheeled their bicycles to the road. She held him for some time, drowning in the minutes, breathing him. She drew away, said goodbye. One last fever on the lips. Dazed by the parting, she climbed over the metal and rode away. A song played in her head. 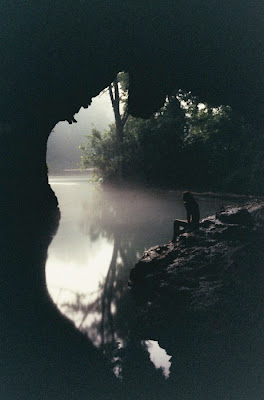