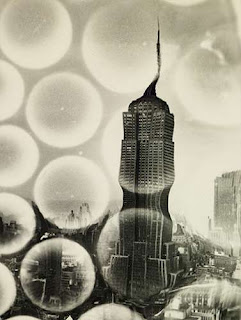 photo by Weegee
I've got mixed feelings about my hometown.
I was born and raised in New York City. I've fed my head with Frank O'Hara and my eyes with Nan Goldin and my ears with the Ramones since i first acquired a walkman. My favorite thing to do used to be walking through the streets at all hours. The sidewalk kept me company. The trees were rare. The city was a symphony.

I used to think New York was the greatest metropolis on earth. When I was 16 with my French library card as a fake i.d. i snuck into Sound Factory and the Tunnel and some long gone bar run by the irish mafia. I was uprocking and exploring until the morning trailed in ruefully...

Last summer in nyc I was lying on my bed, deep in equal parts solitude and procrastination, when a friend from L.A. called to say he was in town for a few days and staying on the lower east side. I threw on a half-buttoned silk man's shirt, tight trousers, heels, and my grandest spectacles, and headed downtown.

We went by bars I had frequented just a few months before. It was ghost town all around. Even pianos was slim pickings. Curse of Monday night or part of the exodus of the avant garde? And when did all these wine bars pop up? I called my sister. She informed she hadn't hung out on the l.e.s. in three years. 90% of my friends here moved away- with good reason it seems. Ok, so I've been out of town for a few years. Has everyone interesting fled to brooklyn? Is there a heartbeat left in this city? A dancefloor worth sticking to? If so, fill me in. Or it'll be me and my mixtapes and Gary Snyder every night i'm back home.

So that's what I was thinking in September. After my last trip to nyc, in January, I decided it's not so bad. The sidewalk still glittered (ground-up crack pipes from the early 80s? erosion? city magic, who knows?) Best food in the world. Pedestrian. Sky not as grey as London town. (Though you forget about it with the 'scrapers hiding it.) The subway for 24 hours, though you better bring a paperback out if you're taking the 4 o'clock in the morning train...and still a few interesting people kicking around.

Still, nyc has lost the urgency and excitement I remember growing up there. The sleaze (which encouraged hedonism and creative freedom) has been replaced with conformist/mass market establishments. Saint Marks Place, once the haunt of Sid Vicious, is now an extended branch of Hot Topic. Everywhere cards. does anyone else remember Coney Island High? Berliniamsberg at Luxxx? Filthmart around 13th st?

Despite its changes, New York is an amazing city with a crazy past. You'll have a good time there. If you're planning a trip there soon, read on past the video clips for a few recommendations:

Some good old-skool NYC Movies: The Warriors, Wild Style, Krush Groove, Downtown 81, Afterhours. NY has changed a lot but they’re fun to get in the city mood.

Downtown 81 a.k.a. New York Beat is a fantastic movie. Basquiat's a teenager, playing himself...

"Meet me at the turnstyle?" fuck yeah. I love Blondie!

Rakim is legendary too...

Some amazing beats and style...

Once I went to a house party in L.A. and this was on in the living room...

SHOP
The best places to buy stuff is in SoHo, the Lower East Side, and Brooklyn.

One of my favorite stores is The Strand: on 12th St & Broadway, take any train to Union Sq, the best and sometimes cheapest bookstore in the world. Check out the pulp fiction, vintage books, and art books.

FOOD
NYC has some of the best food in the world, especially when it comes to Indian and Italian food. Stay away from any touristy place, in Little Italy, etc.

Chennai Garden: 129 East 27th St, between Park and Lex, fantastic Indian Food.
Dim Sum a Go Go: Order the vegetarian Dim Sum Platter. It’s beautiful.
Café Habana: 17 Prince St, by Elizabeth St. If you go to the Take Out Café, next to the restaurant, it’s cheaper and faster and you can sit there too. Order the Tlacoyo con tres Maria and Tostones and Corn. Or split that with someone.
H&H Bagels: on the Upper West Side, best bagels in the world. Order with cream cheese. londoners, if you think those places on brick lane are good, this will blow your mind.
Pommes Frites: 123 2nd Ave, between 7th & 8th st. Amazing frites. Try the rosemary sauce.
Katz’s Deli: if you eat meat, they have a famous pastrami sandwich you should try.
Serendipity: just go here if you love sweets. Famous fot the Frrrozen Hot Chocolate and the ice cream sundaes. Andy Warhol used to come here and trade his work for food.
Zabars: More of a fancy market, but they have great pain au chocolate, and David Glass Chocolate Cake.
Two Boots Pizza: downtown, best pizza.

Google the addresses. Check Time Out and Paper magazine for listings.

OTHER FUN STUFF TO DO IN NYC:
See the life-size blue whale in the Natural History Museum. I’m serious.
Go to art galleries in Chelsea. Or visit the MOMA, the Whitney, the Metropolitan Museum of Art.
Walk through Central Park.

N.B. Cops in nyc are assholes so don’t get caught pissing in an alley/ jumping a turnstyle in the subway (metro), smoking a joint in public, or even drinking outside. My friends and my brother have gotten tickets or arrested for all of the above.
Also, read A Tree Grows in Brooklyn by Betty Smith. and Catcher in the Rye, if you haven't already. Feel free to add to this reading list...
epic.
Posted by Margo Fortuny at 09:55