Two hours of sleep, dry sandwiches in the morning, and then we were flying over Swiss mountains. The plane cruised over a sea of clouds lapping at the bottom of the bluish peaks. We changed planes in Zurich and landed in Vienna. 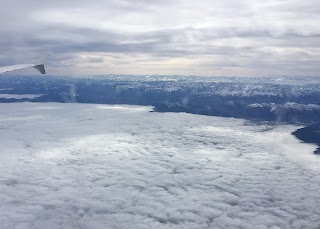 A few hours later, after devouring hot wiener schnitzels with lemon basil sauce at an excellent vegan diner, we stepped into The Purple Cave. It was a small, slightly expensive vintage shop packed to the rafters with 60’s hotpants, 70’s dresses, patterned shirts and collectables including a white mini trench-coat and a leatherette catsuit with cutouts down both sides. I tried on an Ossie Clark-style navy wool dress. My company (El Lobo and Viri the pretty Hungarian) lounged in the tiny bar in the back of the store, surrounded by art books and torn sexy cinema posters. They sipped cold beers and listened to records. I bought the dress.

That afternoon we wandered around Vienna’s elegant streets past dapper old couples and horse-drawn carriages. A white-haired gentleman in a plaid three-piece suit put his camel-colored coat around his sweetheart’s shoulders. An Austrian Aphrodite with wavy red hair scurried to the metro in a long coat and stiletto heels. A young man with an angular face and sad eyes clutched a bunch of flowers on the tram. He looked just like an Egon Schiele painting. A car discreetly nearly ran us over…but everything was so calm and quiet we forgot about it moments later.