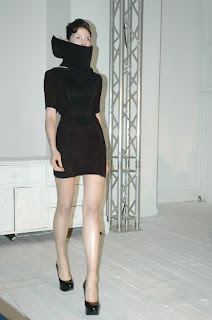 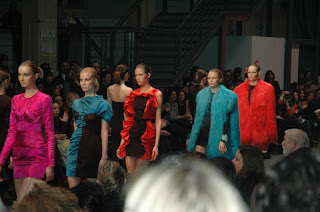 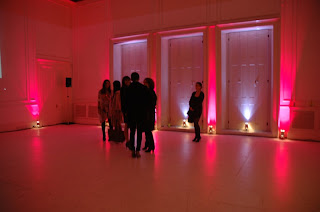 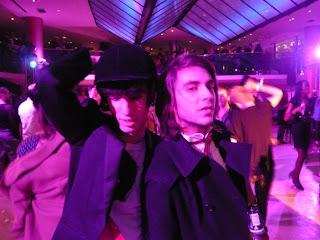 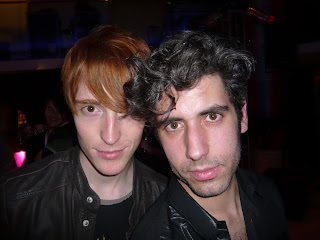 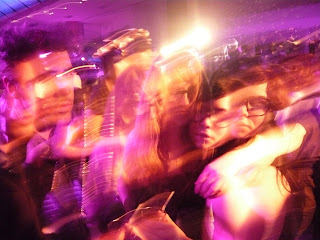 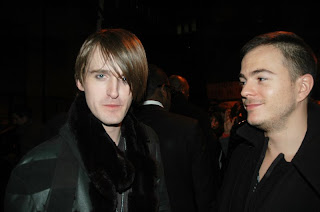 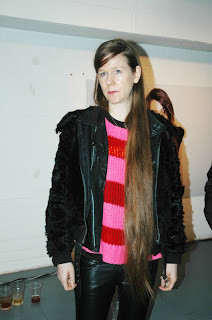 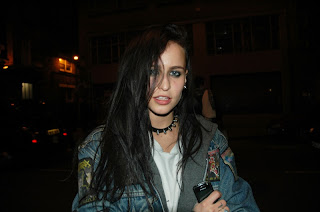 London Fashion Week
--
Ok, here’s my report on London Fashion Week…the inside story. You’ve probably read about all the major designers so I’ll tell you about some of the semi-underground characters-and the parties of course. Sections of this report appeared in Metal magazine.

The Ashish show at the enormous Hippodrome theatre begins with a gymnast repeatedly easing through a hoop suspended from the ceiling. Then a bluesy band starts playing. The lead singer croons like Amy Winehouse as models stomp down the runway in massive zebra-print tranny platforms. The collection features Norwegian knitwear reinterpreted in fluorescents, sweaters in black and white with snowflakes made untraditional via the copious application of sequins, and outfits infested with multicolour puffballs. The look is Jeremy Scott in Las Vegas goes Nordic on Acid. Other outrageous items include baggy sequined American flag patterned MC Hammer trousers and a low-cut sweater with a zebra head attached to one sleeve. My eyeballs need a rest after this show.

That evening we (the photographer Tania Leshkina and I) go to the Matt Irwin photography opening in Shoreditch. Irwin is a photographer for Dazed & Confused magazine, so the images are predictably vivid and full of beautiful and semi-famous people, including Pixie Geldof and Alice Dellal. Dellal herself is milling about the crowded space, along with other models. Geri Halliwell (of Spice Girls fame) and avant-garde performer No Bra are also in attendance. Erol Alkan spins a mix of popular hipster fare by Grauzone, Metro Area, and Glass Candy.


Around midnight, we foxtrot to Chloe Sevigny’s Opening Ceremony party at the Double Club. Henry Holland, Gareth Pugh, Bobby Gillespie, and Anouck Lepere meander around the glittery club while numerous Central Saint Martins MA students and fashion people dance up a storm. Italian photographer Lele Saveri DJs a crowd-pleasing array of tunes that remind me of the soundtrack at Sway in New York, including hits by the Smiths, and M.I.A. Chloe looks stunning as always.

Markus Lupfer for Armand Basi One presents his Fall/Winter 09 Collection in the crisp confines of the Saatchi Gallery. The show is perfect: the models saunter to rock & roll, wearing covetable designs and creepers by George Cox at British Boot Company. The cloths are rockabilly inspired: motorcycle jackets in wool instead of leather, pencil skirts with sequins sewn on, and skinny trousers that flaunted the ankle. The overall shape is voluminous on top, and narrow in the legs. It is an audacious departure from Lupfer’s past collections, which marks his progress as a Womenswear designer.

A flock of alabaster-faced corpse-like models, long wavy hair flouncing behind them, float down the catwalk as Goblin’s soundtrack to Suspiria accompanies them. They wear ethereal dresses over pale tights, shredded sweaters, white lace, and numerous dreamcatchers and feathers tied to their hair and threaded through the hems of skirts. The effect is dreamy and spooky, like fairies after a zombie fight in the woods.

Karamanea is a young Greek designer who graduated from-you guessed it- Central Saint Martins. Her architectural designs are known for structure and craftsmanship. Continuing along these lines, her new futuristic-themed collection features lean silhouettes with cutouts to reveal the flesh beneath. The colours are muted taupes, soft grays, and earth tones. Necklines and hemlines are high.

The invitations to the Marios Schwab show double as 3-D glasses. Scattered members of the front rows hold them up to view the catwalk show, giving the appearance of a vintage cinema photograph in action. The clothes emphasize a nipped-in waist. The lines of the garments are severe, structured, and narrow. In addition to high-necked mini-dresses in bold colours, Schwab’s collection includes long, shaggy, Muppet-like coats.


That evening, I go to the London Fashion Week International Party at The Collection in South Kensington. The crowd is dressed up, often boring, and quite subdued as they lounge in the club’s posh surroundings. Downstairs, an older group mingles and nibbles on canapés. Upstairs, the younger set socializes politely, stretching out on the sofas and cushions.

Seeking a more rambunctious scene I hop in a cab to the Giles afterparty at Bungalow 8. Upon arrival, my friends and I find this crowd to be much younger, drunker, and more lively. Apparently there’s exodus from the all-you-can-drink Mulberry party. Central Saint Martins students rub against posh West End girls. The Buck magazine crew chats while lanky scenesters dance by them on the banquettes. People shake their jutting hipbones to Daft Punk, Inner City, and Robin S. Outside, chic things suck on cigarettes by enormous potted plants. Sober and sleepy, I hoof it back east.

On Tuesday, the Bora Aksu show is so mobbed I can’t even get in. So I decide to save some energy for the evening’s festivities. I was invited to the House of Blue Eyes catwalk show-and I want to go-but it takes place at the same time as the House of Holland afterparty. Photos of the show revealed that it was quite a theatrical event: semi-naked blood-crusted models in daring ensembles cavorting down the catwalk. Luckily I see a few of them in the flesh later in the evening…

My first stop is a party at the Azzaro shop in Mayfair. The champagne is running out but luckily attendees are distracted by the heavenly tower of Ladureé macarons: pale green pistachio next to cocoa praline, patterned with dark raspberry and salted butterscotch rounds…I sample a mango macaron and a chocolate one too-they melt on my tongue-before walking to a party hosted by Storm Models at Whisky Mist. Surrounded by stabby cheekbones and male models, I regret my sugary pillage and join my friends in a booth.

We consume free drinks and leave for the House of Holland after party. A female Cerberus growls at the door, ferociously wielding her clipboard. With my powers of persuasion and proof of an r.s.v.p. in the form of an email, we make it inside Quaglino’s, past the photographers, random hot girls (Agyness Deyn, Pixie Geldof, Alexa Chung, Nicola Roberts…) the bartenders serving thousands of glasses of champagne and cocktails, to the dancefloor. Drinks in hand we talk and run around and check everyone out and drink and drink more and kiss and dance.

“You look like a book I read,” I tell one fellow, thinking of a novel by S.E. Hinton. His friend kisses me. He’s got dried blood (fake- I hope) on his face, which he transfers to mine. I don’t notice until I go to the loo a couple hours later and notice I look suspiciously Uma Thurman in Pulp Fiction. I wash off the goo and return to the revelers. At one point, the song ‘American Boy’ comes on and I look up and realize Kanye West is up at the front, rapping along to the song. Henry Holland DJs with Agyness by his side. After intense socializing, my friends and I appear outside with a mixed entourage of emmaciated teenagers, frisky journalists, and friendly models. Hand in hand, we frolic down the street, and somehow end up at a cheesy club called Mahiki. There are open treasure chests of tropical cocktails and Mojitos on every other table. For the most part, the music is forgettable and the crowd is square, so I talk to local muse/musician Rory McKee and his friend who looks like Harry Potter. The morning hours are approaching so a few of us share a cab back to Hackney.

I’m excited about getting home, writing, and, at some point, after reviewing a gig, catching up on sleep. Time to put on some Leonard Cohen and lie down…

Most of the photographs here are taken by the talented teenage photographer Tania Leshkina. In addition to being an art photographer and having a solo show opening in Paris, soon she shoots for several magazines. One of her pictures, a self-portrait, is the cover on this month’s Italian Vice. Check out her website: www.leshkina.com.

The photographs from the House of Holland afterparty were taken by the dreamy photographer Diego Marin.
Posted by Margo Fortuny at 19:10