I wrote this short story a little while ago… 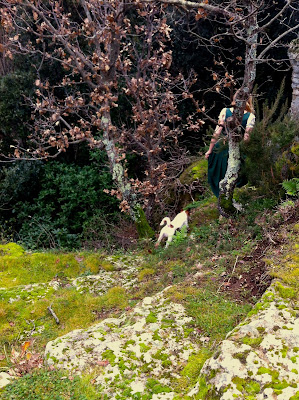 I met her in Rome, where she bought me a red wool cape. Then we drove up to a small town in Tuscany, where she was working on a massive house, guarded by monumental rusty gates and a pack of dogs.  She unlocked the gates and the door and showed me into the drafty house with stone floors.

I felt the strange panic approaching, the imprisoned feeling I usually get when I’m in the countryside. There’s no escaping thoughts and solitude in the silence of the country. Without the multitudes of people and things around me I might become someone else.

I unpacked my suitcase, carefully taking out all the clothes I thought my mother would approve of. Stylish combinations to quiet her prickly concern.  If everything was in top condition, unwrinkled, then there would be one less thing for her to comment on.  I wanted to be close to my mother but I didn’t know how to talk to her. She speaks to me as if I am a half-finished painting in need of repair, one that she has been working on for many years that bears the mark of the artist. I try to communicate through my clothes, wearing what might amuse her or please her.

The next day my sister’s boyfriend brought his best friend over for lunch. The two men moved through the room with the relaxed confidence of people who don’t have many things to worry about. My sister’s boyfriend John was a doctor and his friend, William, was a photographer.

“You’re a photographer? How fascinating!” my mother declared. “Come and see the pictures of Margarita!” She led William to my sister’s photographs of me. She lingered on a large black and white picture of me, half-naked, floating in a lake. A topless Ophelia washed up on Long Island.

“It was very cold that day…” I offered.
“I see, ” he replied, glancing at the photograph.

We resumed our places at the long wooden table. My mother poured more wine in everyone’s glasses. She served homemade cake and told us to have fun on our walk. I gulped two glasses of Campari in the kitchen while the others bundled up.

William drove while I looked at his Ipod, picking out French pop songs from the 90s. The four of us tumbled out for our winter walk over Etruscan trails, past a massive heart made of rocks and a circle of kids smoking by a heap of bikes. My sister and her boyfriend walked behind us, holding hands. We forged forward. The Campari made me more conversational, and lively, though I wondered if I smelled like Marcello Mastroianni on a Sunday morning.  I felt intimidated by William’s beautiful chestnut-coloured suede Chelsea boots, probably one of many pairs since he was wearing these ones on a muddy walk.  I wanted his comfortable life, to travel and take pictures, and beyond that, the rest of it was a mystery, peppered with offhand mentions of Venice in the spring or a wedding in Florence.

John led us past a waterfall to an ancient chapel carved into a cave. Sunlight filtered in, painting the inside a soft golden colour.  William took pictures of my sister and John dipped in shadows. The afternoon faded away. We walked back to the car. I sat in the front and peeled a clementine and fed a few segments to William while he kept his eyes on the road.

After they dropped us off my mother was quiet and then she said, “Maybe you can marry William.”

I turned to her and clenched my fists “What are you talking about? I just met him! What makes you think I even like him?”
“Why do you always date those frail destitute gay men?”
“They’re not gay, they’re from London! There’s a difference!” I shouted. I ran to my room, feeling like a teenager, and searched for a notebook to write in.

A few days later, my sister’s boyfriend came by with his friend to take us to dinner.

“Do you want to make your famous negronis?” my mother asked.  A glass beaker was taken down from the shelf and filled with ruby liquid and passed around the room.  My mother suggested we go to the hot springs.  She waved us goodbye.

After a dinner of pasta and red wine and animals for the boys, we parked by the springs around midnight. My sister stripped off all her clothes and bounded in. Her boyfriend disappeared behind her. I unzipped my dress and wished I had worn newer underwear. I waded into the water, a flash of white cotton and winter-pale skin. William cloaked himself under a large blue towel and changed into long swimming trunks. He crept in after us.

The warm darkness beckoned so I stumbled over the rocks and sat down near a small waterfall. Somewhere in the steam my sister was falling and laughing, her blurry shape colliding into the shadows of her love’s arms. The December air bit at my shoulders as hot water rushed around my waist, pulling me in.  The ravioli and wine acted as sedative. I was making peace with the evening.

Tucked into the springs, wavy hair licking my shoulders, I stared at the stars.  I moved and felt another set of limbs. I tentatively felt the leg – definitely not mine.  There was a moment of stillness, of contemplating whether this was a throne or a man, and then he drifted to the right. William was gone in a few splashes. Did I frighten him? My sister called me. It was growing cold. It was time to drive home. As I dried off I saw William’s car speed away.

“He’s so uptight,” my sister commented, “and ‘Rita, you were really drunk at dinner.”
“I know.  I was nervous.”
We zoomed through the deserted country roads, singing along to the dance music.  After two hours the lights of the house parted the blackness. We were home.

In the morning my mother drove me to see the Etruscan tombs. I scaled the fence and met her by the rocks. We walked along the slippery path in the drizzle, silent except for the soles of our shoes brushing along the rock, the dirt, and the leaves. We have so much in common and yet I didn’t know what to say.

On my last night I was packing my suitcase in my room.
“Are you wearing men’s underwear?” my mother accused, appearing in my room like a phantom.
“This is why you’re still single…” she continued.
“These are my pyjamas: boxer shorts, a shirt – I didn’t think anyone would be seeing them on this trip.”
“Didn’t I give you silk pyjamas for Christmas last year?”
“I have lots of nice pyjamas at home, for when I have an audience. I have Agent Provocateur pyjamas!”
“Then why don’t you throw those away?”
“They’re comfortable.  I didn’t realise there was a dress code for bed around here.”

She picked up the red cape, picked up black thread, and began sewing a velvet ribbon on it, to keep it closed against the wind. She jabbed the needle through in messy, angry stitches.

“You’re so ungrateful. Oh, how I suffered being forced to go to all those excellent schools and ski trips! The torture, the spiders, the injustice! It’s so hard. So, where do you want to live, the ghetto?” she mocked.

“I don’t live in the ghetto! I live near the Central Line. East London is not the ghetto.  I have a great apartment. Why are you always disappointed in me?”

“You’ve become really high-strung. You’ve got to get out of advertising,” she snapped.

“Why do you think I’m in advertising? For the life-affirming deep satisfaction that I’m improving people’s lives? No, I do it for…”

I couldn’t tell her how I wanted to impress her, to get her approval. I thought if I made some money she wouldn’t act so dissatisfied with me. She would notice me, or maybe even praise me.

“It’s your life. What are you going to do?” she asked.

The next morning we all woke up just before dawn. My sister cooked scrambled eggs and my mother packed snacks for the drive and wrapped up a jar of Nutella for me to take home. My sister and I got in the car; jammed with suitcases and pictures she had to deliver to Sicily. She started the car and fastened her seatbelt. I opened the door and jumped out. I ran back in and gave my mother a hug. I felt like a child. My sister honked. The grass was dewy as I stepped over it, back to the boxy little car that reminded me of a cassette tape.  The car coughed over the rocks. The sun rose over the gate as it closed behind us.